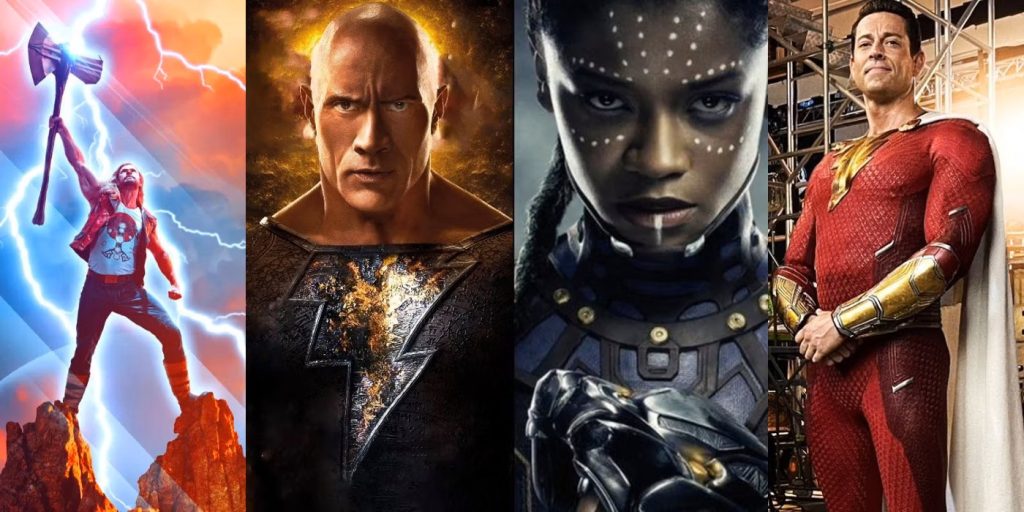 You’ll discover a thorough list of superhero movie release dates for every major comic book adaptation on the schedule, from now through 2024, below. Furthermore, we’ll be updating this guide with the most up-to-date information on a regular basis, so if you ever forget when The Flash is set to hit cinemas, you can check back here for a fast refresher.

Marvel got Taika Waititi, the director of Thor: Ragnarok, to write and direct Thor: Love and Thunder in July 2019, but Marvel revealed the major news at Comic-Con a few weeks later: Natalie Portman will reprise her role as Jane Foster, the MCU’s first female Thor! She’ll play with Chris Hemsworth in the role of Thor and Tessa Thompson in the role of Valkyrie, who has crowned King of Asgard at the end of Avengers: Endgame. Christian Bale was in discussions to join the cast as the evil Gorr the God Butcher in January 2020, and the Guardians of the Galaxy will also participate in the film.

Dwayne Johnson’s Black Adam isn’t the only DC Universe project in the works; on July 29, 2022, Jared Stern will helm the DC League of Super-Pets, based on a story he co-wrote with John Whittington. As a fresh take on Ace the Bat-Hound, Johnson will voice Superman’s devoted canine buddy Krypto with his Central Intelligence and Jumanji co-star Kevin Hart. The film will introduce Krypto as he joins forces with a motley crew of super-powered shelter dogs to defend the Justice League when they are abducted by Lex Luthor and Lulu, the hairless guinea pig.

This idea initially came to light years ago, when Warner Bros. cast Dwayne Johnson as Shazam villain Black Adam. Johnson was supposed to feature in the Shazam film, but he confirmed in the spring of 2017 that they had opted to produce two films: one for Shazam and one for his antagonist/antihero Black Adam. Johnson will be in charge of the latter, while Shazam has already made a name for himself. This project has been in the works for a long time, but things are now moving forward after Warner Bros. set a deadline for screenwriter Adam Sztykielto to complete the screenplay. Jaume Collet-Serra, with whom Johnson collaborated on Disney’s Jungle Cruise feature, was chosen as the film’s director. The plot would feature characters such as Cyclone, Atom Smasher, and Hawkman, with Pierce Brosnan as Doctor Fate. Filming was set to begin in July 2020 but was postponed owing to the COVID-19 outage. In 2021, the filming was concluded.

Ryan Coogler is returning to develop and film Black Panther: Wakanda Forever, and Chadwick Boseman was set to reprise his role as Black Panther until his tragic death. T’Challa’s role will not be replaced, according to Marvel. Michaela Coel was cast in an unnamed part, and production in Atlanta began in July 2021.

5. Shazam! Fury of the Gods

Cast: Zachary Levi, Jack Dylan Grazer, Asher Angel, Djimon Hounsou, Rachel Zegler, Adam Brody, Faithe Herman, Grace Fulton, Helen Mirren, and Lucy Liu Director David F. Sandberg returns to film the sequel to DC’s 2019 hit Shazam!, starring Zachary Levi as the eponymous child superhero and Asher Angel as his juvenile alter ego. This time, Shazam will be joined by his foster family to face the daughters of Atlas, who will be played by Academy Award-winner Helen Mirren and the iconic Lucy Liu. Rachel Zegler, the breakthrough star of West Side Story, will also join the cast in an undetermined role.

Colin Trevorrow, the director of Jurassic World, has partnered with Charmaine DeGraté, a writer and…